First up, we have Jack.

You’d love Jack. Everyone does. Jack is sweet and vulnerable and wants to please everyone. Everyone loves Jack.

Apart from his parents, that is.

I first met Jack in 2015 when a friend of his messaged me to ask if I could take him a food parcel. Jack was 19 and his girlfriend, Emily, was 20.

Jack and Emily were living in a terraced house in my town. I’ll be honest here and tell you that the place was in a right old mess when I arrived. The few pans and plates they had were left dirty around the sitting room, encrusted with dried baked bean juice and  decorated  with roll-up stubs and ash. The kitchen floor was a disgrace and looked like it hadn’t been mopped for a year.  Jack was also filthy. His face was streaked with dust and grease. There’s no excuse for that is there?

I don’t tolerate laziness and presumed that these two were sitting on their arses all day doing nothing while I was working my own arse off to earn enough to buy them food.

“I’m going to go out and buy you some stuff to clean with then I’ll go back out to buy you some food while you sort the place out. If this place isn’t spotless by the time I get back then you’re not getting the food.”

Every surface was wet and shiny when I returned, including the kitchen floor. All the plates and pans were washed, dried and put away. Either I was very scary or these kids were starving.

I started unpacking the shopping with Jack’s girlfriend, wondering where Jack had disappeared to and why he wasn’t helping us. Two minutes later he re-appeared, freshly showered in pair of sweat pants and no T shirt, revealing a skinny frame that was all lithe muscle. He fell upon the food, desperately hungry, devouring bread without the luxury of the butter  I’d bought because it would take too long to spread.

We sat down to chat about their situation.  Jack was working 12 hour days, 6 days a week for £15 a day as a mechanic. A friend of his boss had found the grotty terrace for them and lo and behold, the rent was £90 a week which is what Jack was earning.

I looked at Emily with her beautiful face, big, innocent eyes and her lovely little figure and thought how convenient it would be for their  landlord if they were struggling to pay the rent.

It turned out that Jack and Emily had met in a hostel. I’ve never heard the whole story of why Emily was there but Jack had been in care since he was thirteen.  Jack and Emily  saw this offer of Jack’s job and a house as their big break. It was a chance to get away from hostel life which is basically not much different from prison. Like  prison, there  are people ready to sort drugs for you, some caring staff and then some less so. The threat of being thrown out on the street at any time is always there. The main difference from prison is that you can’t stay inside during the day. Whatever the weather and however few clothes you may have, you have to spend the day out on the street. Oh, and you’ll need to get a referral to a Foodbank to feed yourself instead of having three meals a day provided as you would in a HMP establishment.

Jack asked if they could get any benefits to help top up his wage and that’s when I found out that he was being  paid cash in hand so was basically working illegally. No taxes paid, no national insurance and no insurance if he was injured at work. If he was on the books he could have claimed working tax credit and housing benefit.

Now, in 2017, he wouldn’t be entitled to housing benefit as the Conservatives have changed the rules, of course.

Jack said that maybe it was best if they gave up the house and Emily returned to a hostel. He had been offered a scrap car to live in at his boss’s garage. He could strip the seats out and sleep on a mattress. There was no heating on site so it would get a bit nippy in the winter but there was a kettle and a microwave.

I posted Jack and Emily’s story on Facebook and the response was enormous. A friend contacted me and arranged an interview with Jack at the  BMW franchise that he managed. The position was as a trainee mechanic. He would go to college one day a week and be paid a decent wage with holiday and sick pay.

We found him a shirt, tie and trousers and the bus fare to get to the interview. He was so excited and had tears in his eyes when he told me that every time he’d passed the BMW garage since being a kid, he had dreamed of working there. Now it looked like his dream was about to come true.

He did really well at the interview and everyone loved him. As everyone does. A friend donated a bike so he could cycle the 4 miles to work. And then. . . head  office said no.

Unfortunately Jack had a driving conviction from when he was 14 and was caught riding his mate’s moped up and down the back street.

Then I was messaged by someone else on Facebook who had read the story. He said that he was thinking of opening a garage about 15 miles away and if I gave him Jack’s address then he’d go and pick him up and drive him out to the site for a chat.

Something felt wrong about this. I’d been very careful to avoid  identifying Jack and Emily but we live in a small community where news travels fast and I panicked that Jack was about to be kidnapped and given a good beating for opening his mouth about his employer. I blocked the messenger.

To cut a long story short, Jack left his job, he and Emily moved to the next town and Jack joined the territorial army.  Emily discovered she was pregnant and although I wanted to scream at them for being so stupid, the look of joy on their faces when they told me stopped me and I hugged them instead.

They survived on what benefits they could claim plus the odd bag of food from me. Before the baby arrived my Facebook friends provided just about everything including a cot, pram and baby clothes.

I had my Margaret Thatcher moment when I stated “We are a grandmother” and posted a photo on Facebook of me with the tiny little boy in my arms. The congratulations from my friends to Jack and Emily were overwhelming. A new life brought new hope but there were many nights that I worried about them coping. Neither Jack nor Emily had any role models to show them how to look after themselves,  let alone a new baby. I worried that the house would be a filthy mess and that the baby would be in constant danger.  I popped round unexpectedly with baby food and nappies, a washing machine that a friend donated and another bike for Jack when his was stolen. Always unannounced, I needed to check that everything was ok. It always was.

So are you ready for the happy ending?

There isn’t one. Jack and Emily split up. Jack says that Emily never forgave him for leaving the £15 a day job. The job that he gave up because he thought I’d found him his dream job. She won’t let him see his son. I haven’t heard her side of the story because she un-friended and then blocked me  on Facebook.

Jack ended up on the streets. A few months ago I sat in the Housing Needs offices with Jack and one of his Aunties while we tried to get him back into a hostel so he could be out of the freezing cold.

The housing officer admitted that it was going to be really difficult to get him in anywhere as the hostels were overflowing. The new universal credit system wasn’t really functioning properly either  so  no one seemed to know what the procedure was but Jack had to be registered for UC  so that the  Housing Needs department could make a claim of housing benefit to pay for the hostel. Now the rules had changed, Jack would only be allowed reduced  Housing Benefit as he was still only 21.

Jack was granted 10 days accommodation and told to apply (online only) for rental properties on a website where he would be granted social housing based on a points  system. She said his suicide attempt and referral to mental health services would help if he could go back to the hospital and obtain a report of this. She also warned that  the property  site wasn’t  managed very well so he could be bidding on flats  that went weeks ago.

I will leave you with a photo of my hallway which has been piled high with various items donated ready for Jack finding a home. I also have a fridge freezer waiting patiently in my garage and a table and chairs at my husband’s shop.

Many thanks for taking the time to read this. Tomorrow I will bring you the story of the Police Cadets. 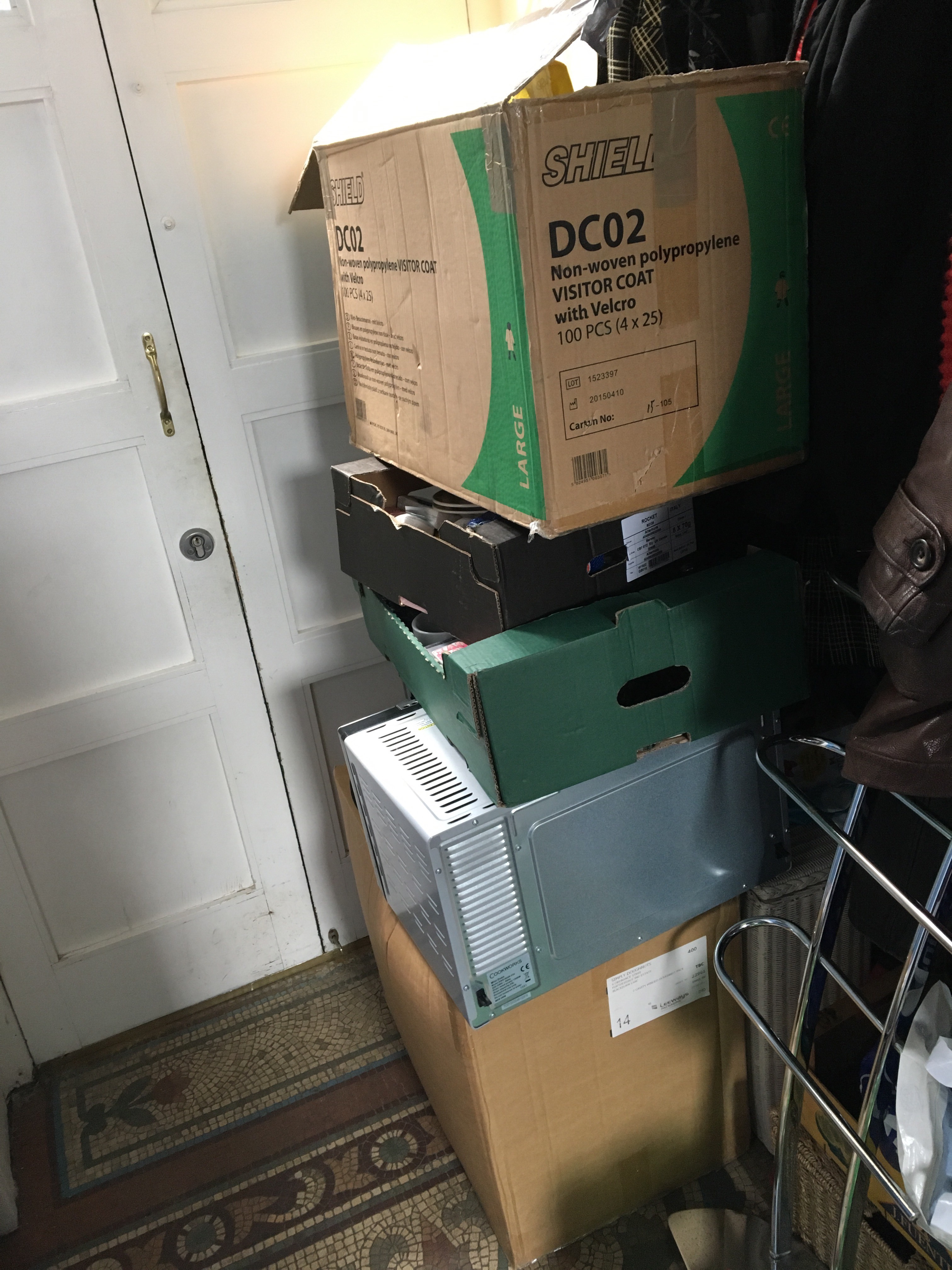