Rather a clever title there don’t you think? Crime of the Century was an album by Supertramp. I’ve used it here because I want to tell you about Brian who lives on the streets. He won’t mind that I’m using his real name because everyone knowns it anyway as Brian is a bit of a star. And I’ve used the old fashioned ‘tramp’ in this story because Brian does live on the streets often tramping miles a day between local towns.

I’ve met Brian 3 times now while hunting for the homeless to force feed my soup to on Wednesday nights in Burnley. Don’t stop reading because you think this is going to be a depressing post, it’s not. It’s about amazing people.

Last week I found Brian in a dreadful state, lying on wet concrete in a filthy doorway. He had his shoes off and when I touched his feet his socks were soaking wet. I thought he would die on that freezing cold night. I’d wanted to call an ambulance but my ex-Policeman, brother-in-law who was with me said the ambulance crew couldn’t force Brian to go to hospital if he didn’t want to. To force him would be infringing his human rights, even if it meant he would die of cold. I left Brian after giving him 2 cups of hot soup then contacted Wesley from Helping the Homeless who took a sleeping bag and some dry clothes round to Brian within the hour. Wesley is hero #1

Brian survived the freezing night and this week we found him upright and sober. He was amused and delighted when I gave him this big, warm jacket which had belonged to Maz, the prisoner officer I wrote about in this post. 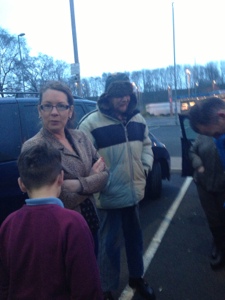 The lady in the picture with Brian is the lovely Natalie who has been looking out for Brian for two years now. Here’s a better picture of her – 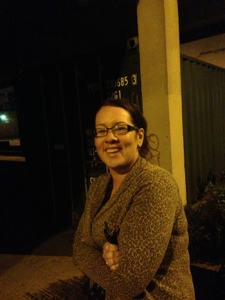 Natalie met Brian after packing up her Christmas dinner leftovers and taking them on to the streets. She now feeds Brian on a regular basis. Natalie is hero #2

I left Brian in his warm jacket and was joined by a merry band of gorgeous girlies to search the streets for other homeless people. Three of the girls worked in a care home and their tales of the old dears who they looked after made me realise that ‘vocation’ really does exist. I couldn’t do what they do but those girls loved their job and the residents.

The evening had it’s hilarious moments – we spotted a likely looking candidate for a cup of soup and a blanket who turned out to be just a bloke on his way home from work. Oops.

Then, later on we came across Brian again and a strange thing happened. Brian was loving the attention of the girls. He gave them a guided tour of his doorway and showed them his makeshift washing line where he tried to dry out his clothes. 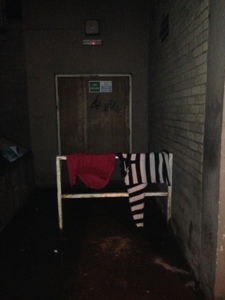 It turned out that one of the girls knew Brian. She had first met him when she stepped out of her house one morning and he was asleep in her doorway. She had been terrified and rushed away to get the bus to work. But her conscience stopped her from reaching the bus stop and she went back to talk to Brian and feed him. Like Natalie, she has now been looking out for him on a regular basis for over a year. I’m not going
to use her real name here because what happened next involves other people who may not wish to be identified. But ‘Julie’ is hero #3

What happened on Wednesday was that while chatting with Brian, Julie discovered her niece was married to Brian’s son. How mad is that?

I felt there was a massively important lesson to be learnt from this. We can never be sure if a stranger really is a stranger. If Julie had stepped over Brian on that first day she found him and later on learnt they were actually related she would have been devastated. People often walk by the people living on the streets because they feel no personal connection with them. But when you scratch the surface and realise these people are just like you but have had an awful event knock them sideways – then you start to understand and empathise. 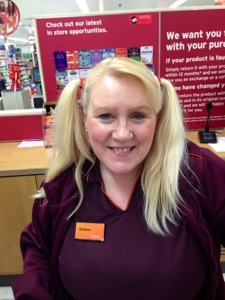 .
Above is Barbara who works at Burnley Sainsbury’s. Barbara is exceedingly lovely. She has fought tooth and nail to continue supporting the local community in spite of Head Office telling her that they can no longer afford to do so. She looks after 8 school nurture groups in the area, giving them each £1200 a year. Prince Charles is a big fan of what she’s doing and so he should be. Barbara is hero #4

Barbara also told me that her store gives all their end of day bakery produce to the women’s refuge and all the manky fruit and veg to the local pony rescue centre.

We’re now coming to the ‘Crime of the Century’ and there are no heroes here. 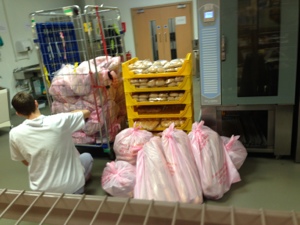 This is one of the pictures I took at Tesco in Burnley about 18 months ago. These bags are marked ‘Unfit for Human Consumption’ but 5 minutes earlier their contents were on the bakery shelves. I called the manager about this at the time but he said it was policy to throw everything away and there was no possibility of my taking the bread and pastries for the food bank.

I followed this up with a call to the waste department of Tesco Head Office and was told the same. Nothing they could do, they said. In fact they said the end of day goods couldn’t even be used for animal feed, in case a horse became ill and they were sued.

So when I discovered last week that the local Sainsbury’s were doing things that Tesco said were impossible, I gave them another ring. This time the deputy manager assured me that all their bakery products were now recycled.

“How do you recycle a Danish pastry?” I asked. The Deputy said he believed they were now made into animal feed but he would get Head Office to call me and confirm this. They didn’t.

So there I was at a Food Poverty conference last week when I spotted a man with a Tesco name badge. I launched into my tirade, not allowing him to interrupt until I had finished telling him how Tesco needed to buck their ideas up and take a lesson or two from Sainsbury’s (or Marks and Spencer’s who give all their end of day produce to local hostels).

And guess what he said? “I’m sorry but I’m just the fishmonger from the local Tesco store so I know nothing about it.”

What the bloody hell was he doing representing the store at a Food Poverty conference?????

So come on Tesco, get your finger out and stop quoting ‘policy’ when you know you’re talking nonsense.