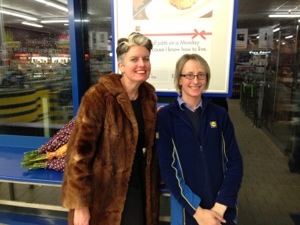 Well we did it. Lidl-gate ended with a ‘phone call from their spokeswoman Georgina O’Donnell saying that I should never have been told by Head Office that store managers couldn’t give end of day goods to the Foodbanks.

So why did they? God knows but who cares? We got the result we wanted and we’ve now gone viral on Twitter with a photo of the e mail statement. Hopefully, very soon every Lidl store in the UK (or even worldwide?) will be passing their perfect end of day produce on to people who need it.

And do you know what? It makes the Lidl staff feel really great to be able to do this from the manager Kon to the deputy manager Kirsty (pictured with me) to all the floor staff and even the security guards who were asking about helping the homeless.

The other thing that has brought delight to scores of people this week is the fact that Lidl let me take the flowers too. As one mum said, in tears “I haven’t had flowers for years and I love flowers. But you can’t buy flowers when you can’t even afford food.”

We’ll be in the papers at some point this week and I’ve been on the radio three times in the last few days. I have now learnt that the BBC get a bit tetchy about you saying ‘dyke’ and you’re not allowed to mention individual branches of supermarkets. You live and learn. 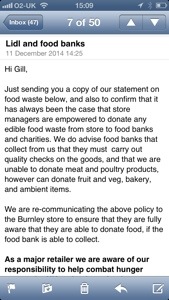 2 thoughts on “Hurrah for Lidl!”