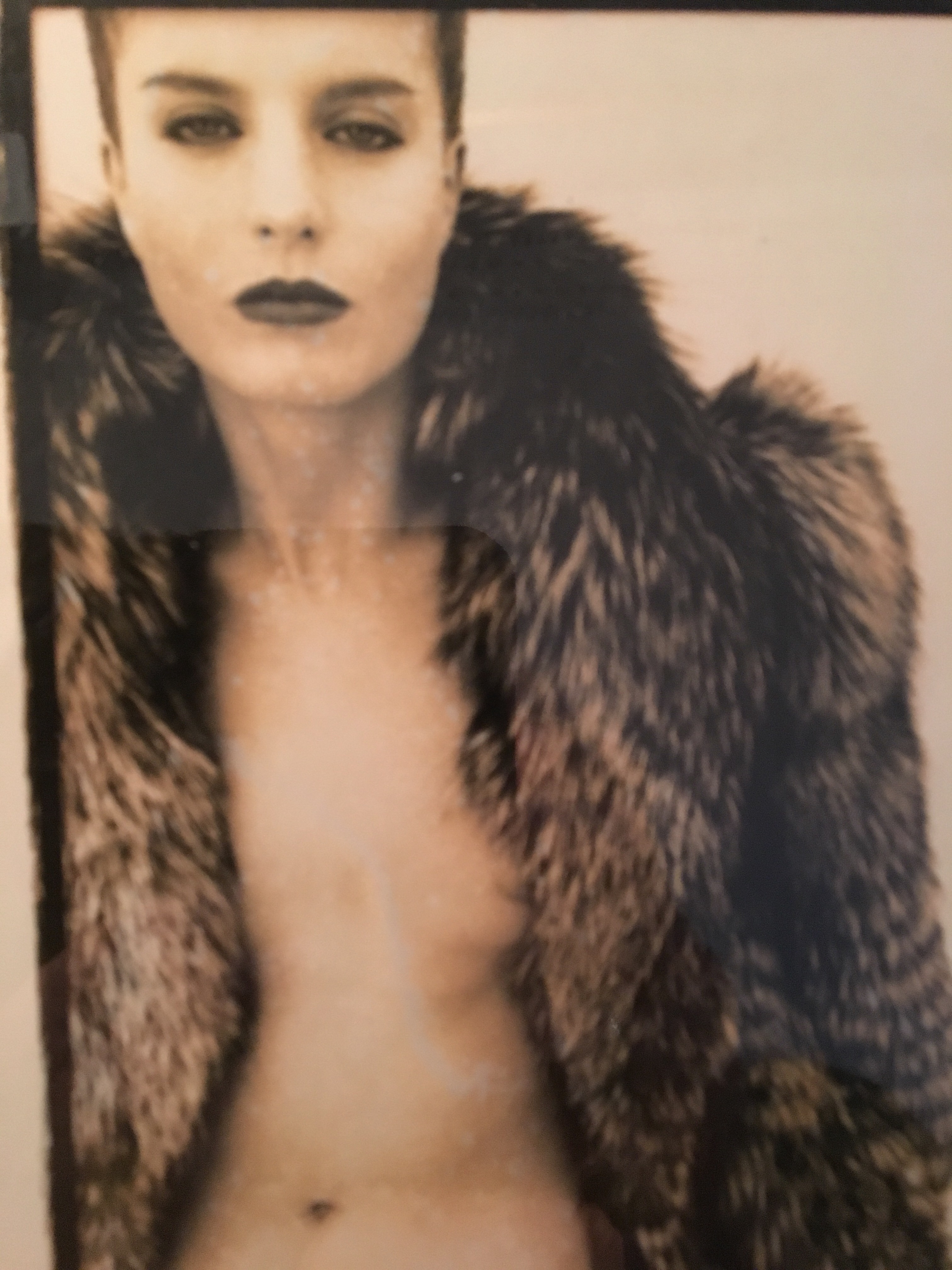 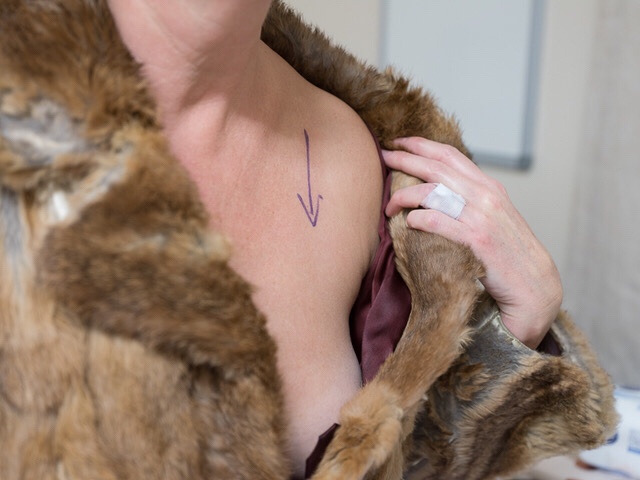 I’ve had a lumpectomy. The surgeon said he was removing less than a centimetre of tissue so I’m left wondering why half of my breast has disappeared.

I’m also wondering if I should even mention it when I return to see him tomorrow because asking about the way my tits look makes me feel narcissistic and petty. After all, he was scraping about in there to remove pre-cancerous cells and potentially save my life so why should I be moaning about looking a bit freaky?

I’d been called back after my routine mammogram because there were areas of calcification in my left breast. Probably nothing to worry about but I needed a needle core biopsy to make sure.

I returned for the results of the biopsy and was told that I had five In-Situ carcinomas of only 1mm in size but they needed to be taken out.

My surgeon (I’ll call him Mr Almond) said he would be taking the cluster out with an area of 1mm clearance around it for testing. He said the most that would be taken was an area of 9mm, that the incision would be made around the nipple for the best cosmetic appearance and he would be drawing the tissue inside together to lessen any dimpling effect.

So, less than a centimetre would be taken. Neither here nor there.

I’d actually told him that I wasn’t worried about the cosmetic appearance or, in fact, about having a mastectomy if that was the better option. Mr Almond said a mastectomy would not be offered as it could cause problems of its own and not necessarily stop a cancer from spreading.

I think the reason I feel annoyed about half of my breast disappearing is because there have been a few things that I’ve been told so far by the doctors and nurses that have been wrong. None of them really matter in the great scheme of getting rid of the teensy bits of cancer inside me but from the beginning of this journey I knew I wanted to make a record of it to help any woman who may be going through the same thing. It may not matter to me that half of my breast has disappeared but it could be devastating for a teenager if she had not been warned.

Another bit of misinformation had been about false nails of all things and again it may not be important in the bigger picture but this is what happened and why I was annoyed when I found out that the information was wrong.

I had became quite emotional during my pre-op assessment when the nurse said “We won’t ask you to remove clear acrylic nails and you can wear nail varnish when you come in for surgery as long as the polish is clear so we can see your nail beds.”

I expressed my surprise at this and welled up with the reply.

“We nurses fought for that. You women are coming in to have part of your femininity cut away. We ask you to take off your jewellery, your make-up and your perfume. We wanted there to be a little bit of femininity you could hold on to.”

I didn’t give a damn about wearing false nails but the thought that nurses were fighting my corner and considering what may be important to me meant a lot.

My 17yr old, Zoë said we should go and have acrylics done together. I considered it but having seen how she struggled to pick anything up whenever she had hers done, I decided this was not the time to start.

Part of me was already struggling to cope with minor frustrations since my diagnosis. Simple things like trying to get the lid off the coffee made me throw it across the work surface. So really, the stupid false nails were a bad idea.

It turns out that the nurse who had me teary-eyed at the thought of her fighting for my false nail rights was talking a loads of bollocks anyway and was later spoken to by her sister for mis-informing patients.

The deal is that if you’re having a general anaesthetic you won’t be able to wear acrylics or coloured nail varnish. End of. The nail beds, all of them, need to be visible at all times in case they start turning blue.

The next thing that went tits up was this;

I’d asked and been granted permission to have a photographer with me at the hospital on the day of my surgery.

When my dedicated nurse had asked “Do you have any questions?” after I’d been told I would need to have a lumpectomy I’d replied “Yes. Could I bring a photographer with me on the day of surgery?”

“Well I can certainly ask the consultant surgeon for you”

The nurse was gone for, at most, two minutes and came back with this reply.

“The consultant surgeon says it’s fine to bring a photographer but they won’t be able to take photos in the operating theatre. However the surgeon is happy to take the photos herself during surgery.”

I made a joke about my surgeon holding a camera in one hand and a scalpel in the other but was reassured that there would be two surgeons in theatre with me but only Mr Almond would be doing the operation.

On the day of my lumpectomy I arrived at the hospital with photographer Casey Orr and proceeded to strip off for Casey to take pictures of me in my room.

When I was in my 20’s I modelled naked, in a fur coat for a left-wing newspaper in Israel. The photographer said that the only women who wore fur in the heat of Tel Aviv were the wives of the Hasidim. He objected to them wearing fur as a status symbol when their husbands didn’t have to work or take part in army conscription. The photograph was meant to upset the Hasidim and it certainly did that. But not as much as it upset the fur trade.

The photo became quite famous and I was interviewed about it for the papers and magazines. At the time I was a vegetarian who didn’t even wear leather shoes so I was in a good position to argue about wearing the fur as a protest.

Today I’m a meat eater who wears old and raggy furs to stay warm. I’ve written extensively about this and hold the view that if animals are killed for their meat then the whole of the animal should be used including the pelt.

So, I wanted Casey to take a picture of me in a fur coat, thirty years on from the original picture with my older, saggier and imperfect body in an old and raggy, imperfect fur.

We spent over an hour taking pictures.Shots of me naked in the fur. Shots of me in my special, matching bra and knicker set that I had bought for this momentous occasion in the life of my breasts. Shots of me painting my nails with the clear nail varnish. Shots of my engagement and wedding rings being wrapped in tape and finally, shots of the arrow drawn by my surgeon on my chest, pointing to the diseased left breast where he would operate.

This hour was incredibly important to me. It was a meditation; a preparation.

The anaesthetist came in to do his preliminaries with me and asked why I was having photographs taken. He left the room and five minutes later a nurse appeared and said “Matron says your photographer must wipe all the photos from her camera and leave.”

“But we have permission from the consultant surgeon”

“You don’t have Matron’s permission” she said and left, as did Casey, taking her camera and all its beautiful pictures with her. We were fucked if we were going to wipe them.

You won’t be surprised to hear that everyone also denied the agreement to take pictures during surgery.

The consultant surgeon wasn’t even there on the day of my surgery, she was on leave, so Mr Almond knew there was no way she could have agreed to take pictures.

If it wasn’t for my sister having been with me when the nurse confirmed the pictures would be taken, I would have thought I was going mad. But my sister had made notes, thank god.

Maybe I should have just let it go but Mr Almond started saying how no-one had ever asked for photographs to be taken during surgery before so it couldn’t happen. That one of the theatre staff would have to take the pictures and they were unlikely to agree to do so. That the theatre camera would have to be found. That disclaimers would have to be signed and permissions sought from the very top.

“You may find that if you asked the questions then all would be granted” I smiled.

At the very last minute, as I was about to have my anaesthetic, a disclaimer form was produced for me to sign, the theatre camera was found and a member of theatre staff said they would be happy to take the pictures. I’m not sure ‘permission from the top’ was ever a thing.

So here we are, a week after surgery, feeling a bit bruised and battered both emotionally and physically.

I may have half my boob missing but at least I have a cracking set of photos.