Oh my word!   19k Facebook likes for my post about the starving boy! I wish I could respond to all your amazing (and heartbreaking) comments individually and I will try over the next week but I just wanted to post a massive THANK YOU to all of you for sharing and commenting and wanting to change the  awful situation that so many people find themselves in.

Some people have offered to send money to help this boy in my story so I need to address that. I’ve never looked for funding or money donations for what I’ve done – not for the Hut which we filled with Lidl waste 5 days a week or for any of the people I’ve fed. There have been random donations over the years from my family and friends but on the whole, until this year, it was my housekeeping money that was the crisis money for families.

In spite of my saying that I didn’t want a Go Fund Me page or anything similar, a few months ago I suddenly had a flurry of donations coming from allover the place which I literally couldn’t stop and then a private benefactor said he would like to donate £100 every week. That’s great isn’t it?

Well it should have been but there was something  that didn’t sit right with what I was doing and what my principles were. I know this sounds really ungrateful but  I’ve always thought it was best to help people by rescuing the waste food or asking people to donate household goods and clothes when we needed them. Money is the root of all the trouble in the world and I think we’d all be a lot better off trading skills and kindness to get us through life instead of cash. By the way, I don’t mean trading in heroin (see my earlier post re the heroin workforce up here in the grim North).

The money could make such a difference and buy school lunches and electricity for kids to have a warm shower for once and who the hell was I to say no?  But in the end I didn’t have to make the uncomfortable decision because the charity who had agreed to bank and distribute the money decided it was too much  responsibility. I told the private benefactor and he nearly fainted. It was the first time that anyone had ever refused his money.

I wanted to ask if I could introduce him to someone who needed the help but I was too scared. There was a young lad living on the streets who I’ve known for a long time and am really fond of and I had the idea of linking up the rich man and the poor man and all would be well. But I was too scared in case the benefactor felt pressured or insulted by this. Or scared.

Because it IS scary to get to know someone in genuine need but sometimes we have to scare ourselves.

If you open your eyes (and I’m not being condescending here) I mean really open your eyes and notice the kids who are hanging back behind their friends at the tuck shop after school, the ones with downcast faces and no sweets (a lovely lady who commented on my post had noticed two brothers like this and had a quiet word with them so she can  now makes sure they have a few pennies to join in with their friends and buy sweets after school) then you’ll soon notice more and more people who are putting on a brave  face when their lives are really crumbling.

If you can reach out to any of these people – personally – and not ask someone else to do it for you then your life will change forever.

I’m not saying that you won’t get upset when you look into the eyes of a child who’s starving – you will. The first time I took free fruit and vegetables out onto the street I had a little girl who cried when I told her she could take as many apples as she wanted. It was just too much for her to cope with, the offer of plenty.  It will hurt but it’s better than putting the tin of beans in the food bank trolley and hoping for the best.

We all need to really understand what those Foodbank statistics mean and we need  to see the people and the stories behind them because 8 million food insecure people in the UK is just a figure but one kid fainting infront of his teacher in school because he hasn’t eaten for 3 days is the true picture of what those figures mean.

Be brave, be bold and don’t forget to vote the Tories out on June 8th. 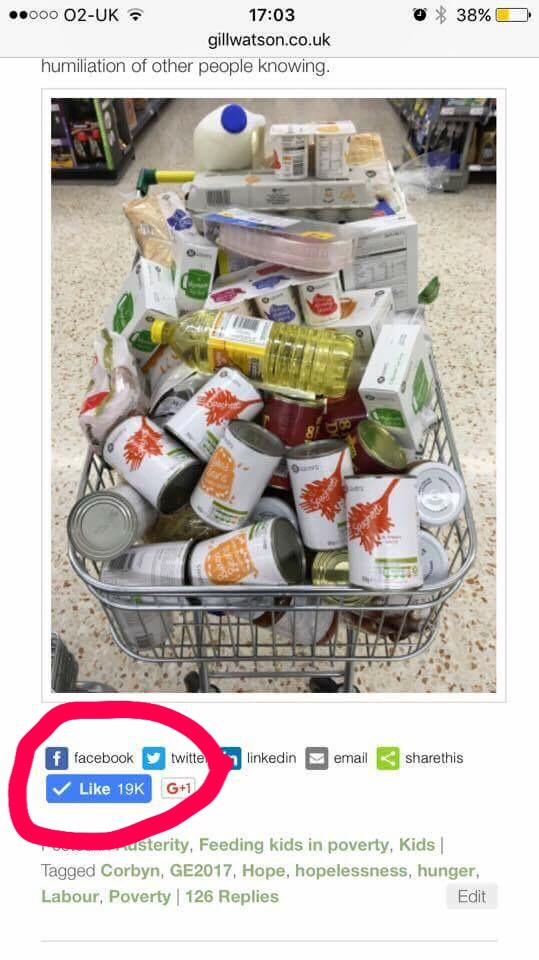