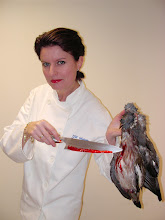 Gill Watson’s passion for food and cooking began at seventeen when she left home to spend a year on a Kibbutz.  Middle Eastern food intoxicated her – it was the antithesis of her mother’s overcooked beef and sloppy, tasteless vegetables.  Babaganoush, shakshuka, foules medames – the names were as exotic as the tastes.  She sampled everything and talked her way into both home and professional kitchens to discover how to re-create the dishes she loved.

Deep fried battered sheep’s brains in pitta bread from Cairo market still rate as one of Gill’s top ten food sensations.  Chicken feet with chilli and peanuts are also up there.  As is the lemon filo cake eaten in Corfu this year.  Gill has tried to make this cake twice and on both occasions it has turned out disastrously.

Gill fell into cooking rather than planned it.  Before cheffing she worked for a book publisher,  at an art gallery, and as an interior designer.  She has also spent a lot of time waitressing.  But cooking was always beckoning from the sidelines and when Gill was offered the chance to run her own restaurant in a boutique hotel in Devon she donned her oven gloves and grabbed it.

Gill taught Italian cookery at catering college and free-lanced for London’s premier outside events caterer, Rhubarb.  Working as a Private Chef was probably the most enjoyable period in Gill’s career as she could create grand dishes on a small scale without the restrictions of worrying about profit margins.

Writing committments and a very demanding family dictate that Gill  now only accepts cheffing commissions from friends or people who have found themselves in a fix – for instance if they have been let down by their wedding caterers a week before the big day.  Funerals for friends are always free of charge.