****WARNING***** If you are a new mum who is suffering from breast cancer, I don’t want this post to upset you. I was upset by all kinds of things I read when I was in the late stages of pregnancy and the early weeks of motherhood.

This is just the random thoughts that came into my head on this day and I’ve chosen to publish them because I thought it may help other women. However, if I’m upsetting or offending any woman then what I’m doing is wrong and I’ll delete the post. Just let me know. ******* 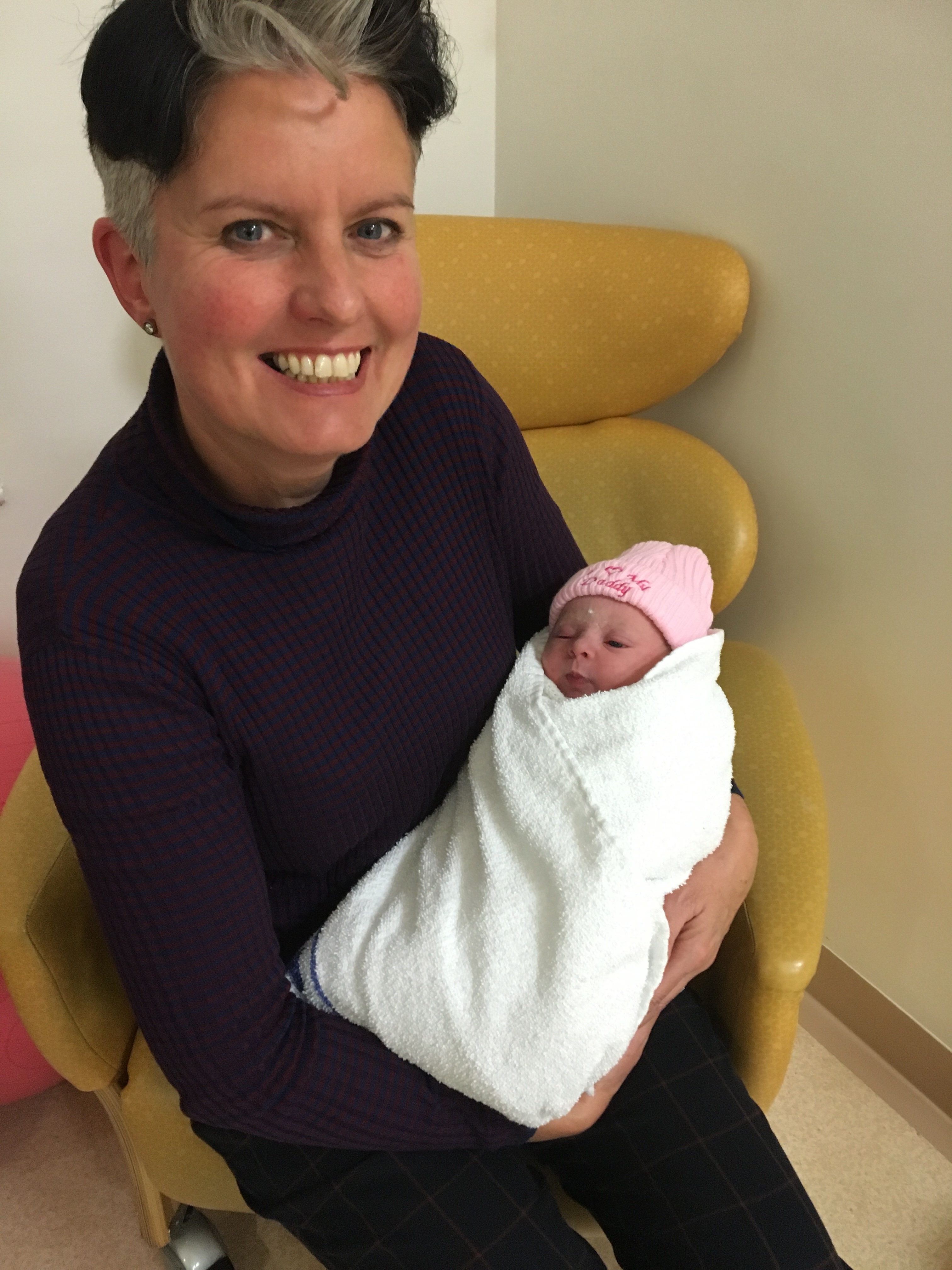 A few days after the needle core biopsy was done, I had the honour of holding a new born baby in my arms. I should have been there for the birth of Summer Rose but she decided to make an early appearance; shortly after I’d left her mum, Emily, at the hospital, to nip home and feed my kids.

When I arrived back, little Summer was swaddled in a blanket and lying in her dad’s arms.

“Do you want to hold her?” asked mum Emily.

I tried to decline even though my maternal instincts were begging me to hold her. “It’s best that newborns just smell their mum and dad for the first 24 hours I think.”

But then grandma Theresa walked in and said she’d already held her so I may as well.

And so I sat with the tiny, snuffling, new life in my arms and all was well in the world. There were no wars and no famine and no hurt and no pain. There was just the miracle of new life.

Then baby Summer began turning her head and opening her mouth, putting her tongue out, grumbling and searching for a nipple, wanting to latch on to her mother and drink.

“Are you not going to breast feed her Em? It’s free and it means you can carry on sleeping while she’s feeding. And no bottles to wash and sterilise.”

Emily shook her head “No way. Mum, where’s the bottle?”

I wasn’t going to push it. But little Summer was still trying to latch on to me. I remembered the time when Joe was two days old and we went to the wild boar park because I wanted Zoë (then five years old) to have a treat so she wouldn’t feel jealous.  A mother boar was running away from her babies as they chased her around, trying to feed from her the minute she stopped. But as soon as they latched on she would kick them off again and run away. I stood watching with my breasts pouring milk, desperate to feed the baby boars.

Now I looked down at Summer and imagined feeding her. And then remembered that my breasts, the breasts that had done what they were designed for and given life to two children, were possibly  diseased.

I also couldn’t remember if women could still breast feed if they had breast cancer? I had a vague memory of reading that they could and that cancer cells would not be in the milk. But how would a woman cope with that emotionally? The desire to nurture and feed their baby with a breast that was diseased must be the most difficult thing to get your head around.

Here was baby Summer in all her newborn perfection and I felt that I didn’t even want to breathe on her with the air from my possibly diseased body. I didn’t want to contaminate her.

And in that moment, I panicked that she may be able to smell or sense the cancer within me and I handed her back to her dad.

When I got home, I did what I’ve done for the last ten years after visiting a hospital. I took a carrier bag to the shower room, removed my clothes and put them in it then stood in a hot-as-hell shower and scrubbed every inch of myself (including inside my nostrils) until I finally felt I’d washed the hospital away.

I then dressed in fresh, clean clothes, sprayed myself with perfume and carried the bag downstairs to tip the contaminated clothes into the washing machine without touching them.

I’ve had a phobia about hospitals (and especially Burnley General where Summer Rose was born and where I was having my investigations) ever since my mum died in there after contracting C-dificil.

Joe was just over 12 months old at the time and I was terrified I was going to bring home c-dificil and kill my son with it.

My paranoia was so bad that I bought a stack of clothes from the charity shop, washed them and then used these when visiting my mum every day.

We were living in a terraced house at the time which had an an out-house in the back yard and I would strip down to my knickers and bra in here, putting all the other clothes in the outside bin before making sure I went straight upstairs to my boiling shower without stopping to touch anyone or anything. I would shower and wash my bra and knickers in there at the same time. I also covered the seat of the car with a bin liner and wiped down the steering wheel, gear stick and door handles with antiseptic wipes every time I travelled back from the hospital.

In the last days of my mum’s life I took a duvet and pillow into hospital so I could sleep on the floor beside her. These all went in the bin when Mum died.

I thought, over time, that my fear would go as I suspected it was just a freaky part of my grieving process.

It didn’t. The happy reasons for my visiting the hospital (the previous birth of baby Gabriel and the just-missed birth of Summer Rose) still couldn’t stop the fear.

Part of me, on this night after leaving Summer Rose, worried that people would want to avoid me if I had cancer. I worried that my children may not want to hug me, that my husband may avoid kissing me.

It’s quite possible that I’m just a crazy lady and that no-one has ever felt like this before but if you have I want you to know that you’re not alone.