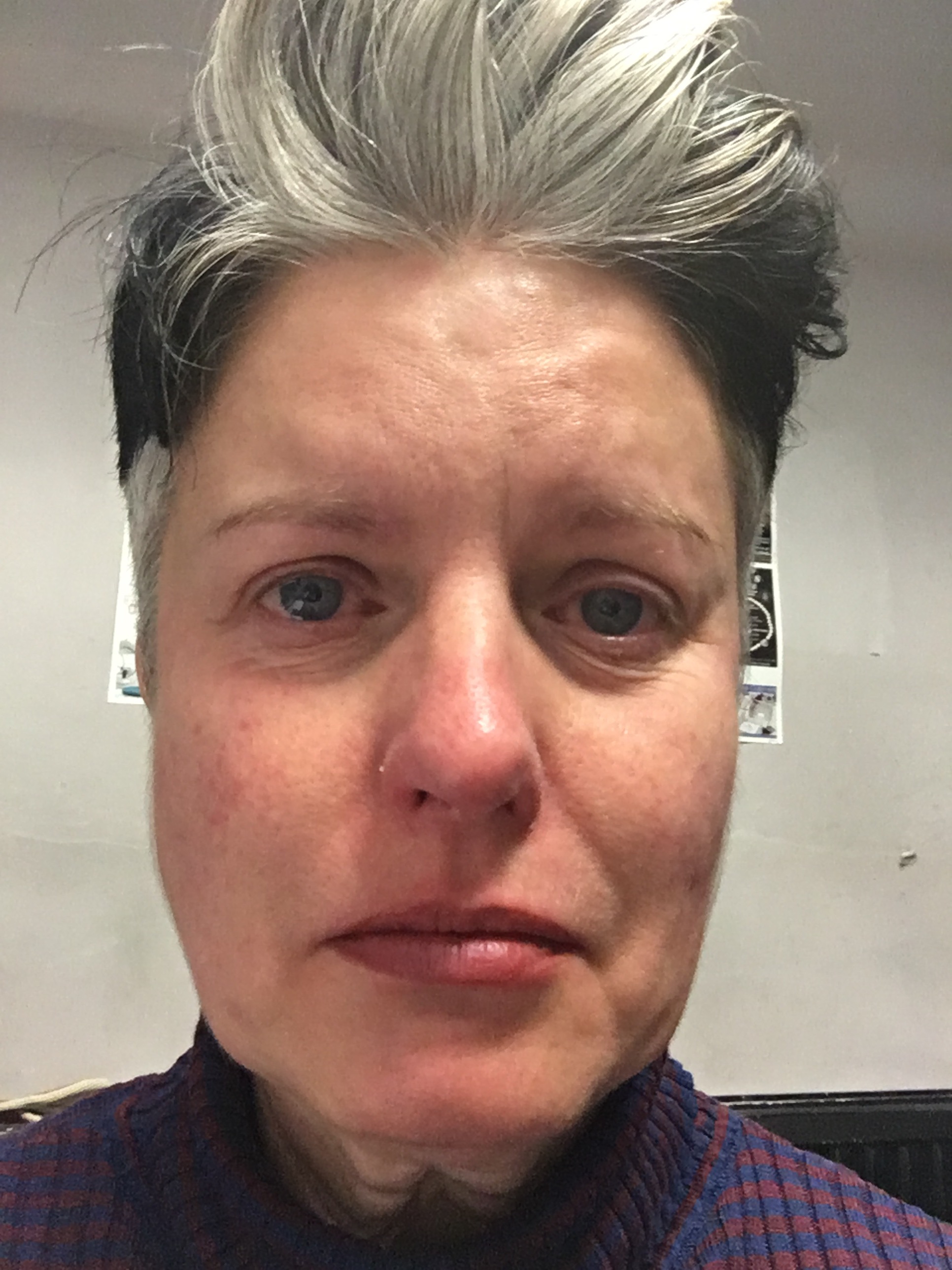 I HATE what I look like when I cry but I’m posting this awful picture of myself because tomorrow I’ll feel better and I need to be reminded of how I felt today, how I feel now, in bed with a glass of wine, 8 hours later and still fucking crying.

I had a full on blubbing, hysterical episode in the supermarket. It was so bad that I had to call my friendly copper  to come and help me and it all started because of a can of cheap, shit beans.

I was using the last of the money donated to me for food parcels. I had £45 and I needed to feed a young teenage boy who I’d fed before. I knew his situation, I knew it was shit but it was nothing new to me.

I’m not saying that I’ve become hardened to all the poverty and the sadness and the humiliation that people ar experiencing out there but I haven’t cried for a couple of  years about it. As long as I knew I was helping, even if only for a while, then I could cope.

I didn’t cry when a little boy brought his granny into my husband’s jeweller’s  shop to sell her earrings to buy food.

I didn’t cry when a nasty bastard of a father slapped his 10 year  old son with full, fat-man force because he took a bread roll from me.

I didn’t cry when the little girl cried because I gave her pizza to eat that night (the pizza was from the Lidl bins).

But today, probably because I’ve been feeling a bit poorly with a cold and also because I’m withdrawing from the food aid stuff and I’m feeling guilty as hell about it,  I lost it.

As I took the can of shit beans from the shelf to add them to all the other shit  budget food products (and toothpaste at 25p a tube, soap at 20p) in the trolley I thought “If this was my Joe and he was starving, he would be gipping trying to eat beans”. Joe has Aspergers and cannot ever put a baked bean in his mouth. It’s a texture thing. Too much slime.

I thought about this poor teenager being forced to eat something he didn’t like because he was starving through no fault of his own and it just destroyed me. I looked at my trolley full of the cheapest stuff and wanted to tip it over and fill it with steak and asparagus and cream and that bloody pomegranate juice that costs more than a bottle of wine.

I only had £45 to spend and I’d been carefully adding everything up in my head until this point but when I started crying I couldn’t   remember where I’d got to and didn’t know how much I had left to finish the rest of the shopping.

Typically, it seemed that everyone I had every known was in Morrison’s  this morning. To everyone who stopped and hugged me and listened while I tried to explain what the hell had happened to reduce me to the wreck that I was, I say one great big THANK YOU.

And I say thank you to Mike who waited at the checkout to see what the bill came to and then gave me his discount card to get the total down to £45.

I say thank you to my copper who helped me at the check out, packed the stuff into the car, assured me that things would get better. She also said that the Tories absolutely couldn’t get back in again because they would have free reign to destroy the police service. She truly believes that Labour will win the general election so she was trying to  be positive.

And finally, thank you to Ged, my very long suffering husband who let me collapse in his arms and waited while it took me an age to be able to speak and assure him that none  of our children had died, I was crying about someone else’s child who was alive but starving.

Here’s the trolley full of shit. There are doughnuts and two packs of real butter, cheese and sausages and bacon but nowhere near enough protein for a teenager. There’s also a man-style shower gel because the thought of him being bullied for not washing his hair or not smelling nice  at school was too much.

Do you know the worst thing? Even though this kid is visibility losing weight from his already skinny frame, he tried saying he was ok and didn’t need anything. This is what this society is doing to people – it’s making starving kids pretend they’re not so they don’t suffer the humiliation of other people knowing. 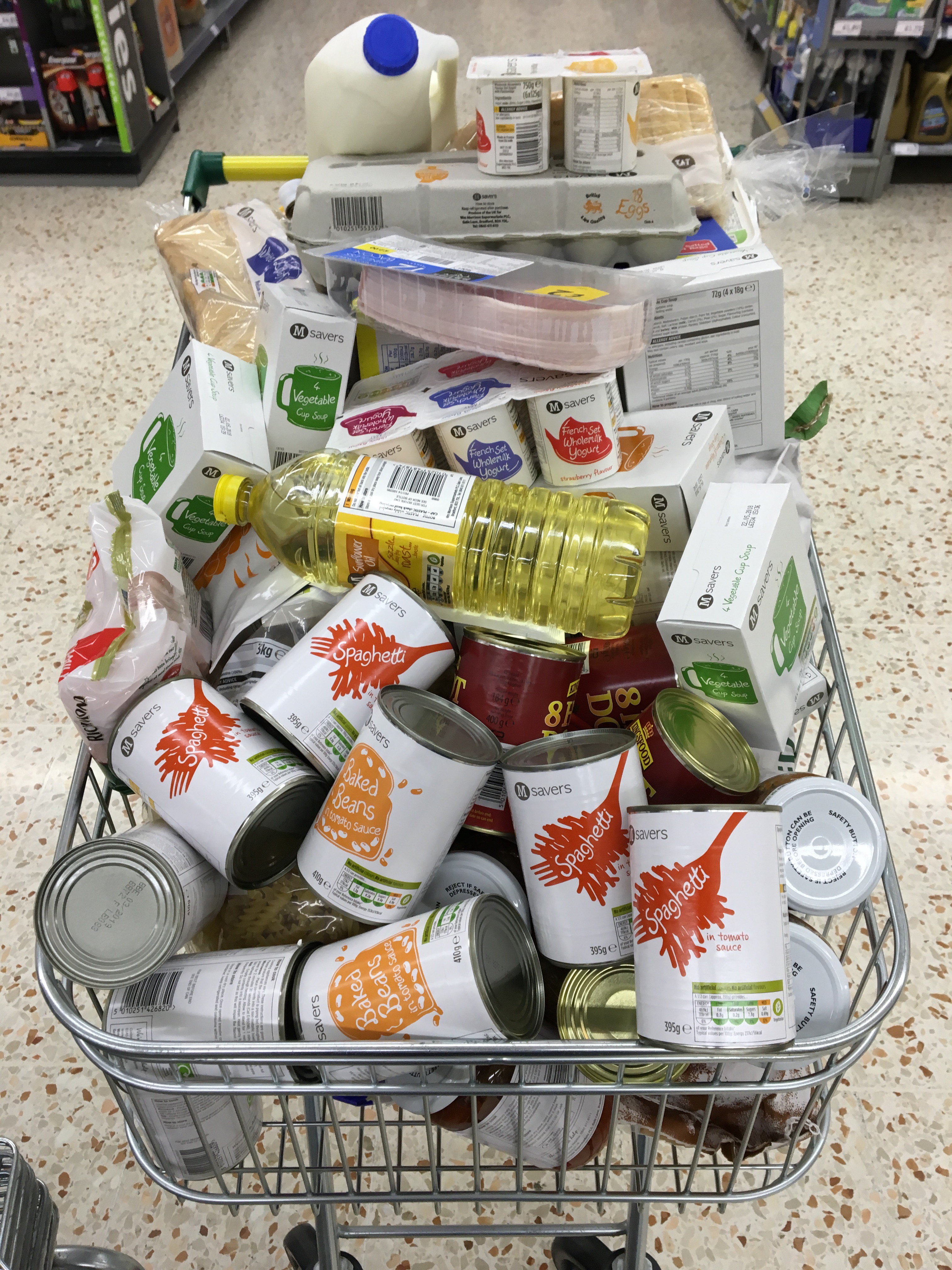 169 thoughts on “Today, a tin of beans in Morrison’s sent me over the edge.”